And damn, was it wicked.

Literally the hardest thing I have ever done.

I would’ve crawled to that finish line if I had to but I was not going to give up – despite the many, many emotional walls I hit during the race – I did not give up. I played this mantra in my head the entire time: “Run if you can, walk if you must, crawl if you have to, but just don’t stop.”

Between playing that in my head on repeat throughout the race, and my drill sarg of a husband coaxing, pushing, and outright yelling at me to get out of my head and just GO, and I managed to get through the entire 13.1 miles. Without stopping. Without walking. And beating my race goal (by a minute) of making it 2:30 or less.

But let’s back up a bit, shall we?

Woke up around 5:30, to make sure I had time for a small breakfast before we left. I chose a banana with peanut butter and some water. That’s about all I can tolerate before a long run, much more and I feel uber-heavy and slow. Scott and I took a “before the race” shot at the house – notice how wide awake we are here, ha.

We got to the race with about twenty minutes before the start so we had a chance to loosen up, get our game faces on, and yes, take a few pics. Here’s a pic of us with our Kick shirts on – we figured it was fitting since that’s how we met, bonded and became the best of friends, and it’s where this whole crazy half marathon idea first started. And – we ran out of time to make our own race day shirts. 😉 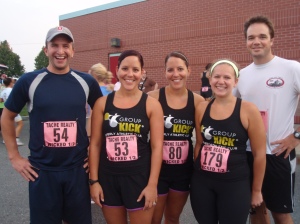 Our fab friend Meg acted as photographer and team cheerleader for the day, and for that, I am eternally grateful. Especially since she drove us to our car at the end of the race (we had parked a good half mile away, oof). She took some awesome start and finish race videos which I’ll share later but for now, most of these pics are all thanks to her. Love ya, Meg!!

I have to say, I felt pretty good and confident as we lined up for the start. It was a little warmer than I would’ve liked but nothing unbearable. I felt ready and excited to finally get this Wicked Half done. 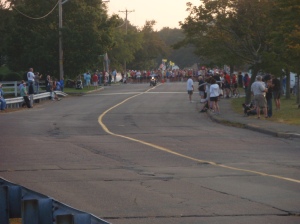 And before I knew it, we were well on our way. And I was still feeling pretty good until about mile 5. And then those mile markers started to taunt me, like whoa. Instead of thinking “yes! one more mile down!” all that I could think about was, “damn, 5 down, 8 more to go!?” And that, my friends, was the hardest part of this race for me, mentally – those damn mile markers.

I knew a wall was coming, and I thought I was prepared to address it, but it was a lot harder on me mentally (and physically) than I thought. Miles 8-10 were brutal. I wanted to cry. I wanted to give up. I wanted to stop. Scott would NOT let me. No matter what, he was my rock and my own personal drill sargent – something I will never forget. I am not proud to say that I needed him in those moments, I really did.

But – if I thought miles 8-10 were tough, it was miles 10-13.1 that were impossible. I initially thought that by the time I hit mile 10, I’d be golden. It’s “just” a 5k left if you think about it. That’s less than 30 minutes, right? Wrong. Those 30 minutes were the longest 30 minutes of the entire race. Every step felt excruciating. By now, those mile markers were like a slap in the face – I hated seeing them.

But, thank God for my in-laws who appeared, as if out of nowhere, at mile 10 to cheer us on, offer us water and beam at us with pride. (I learned later that my sis had hit her wall around then and was walking off a searing side cramp. My father-in-law walked with her for an entire mile to help her through. Amazing. I honestly have the best in-laws ever, EVER.)

And then, something came over me by the time we hit the 12-mile marker.

I just wanted to be DONE. My husband said that that last mile was the proudest he’s ever been of me, in our entire relationship. I don’t remember it. It was like I wasn’t even there. I flew through that last mile and I have NO idea where that energy came from. I just had to be done and was just about ready to anything it took to get done. We hit the finish line (or what I thought was the finish line) and I stopped. Only to realize I hadn’t hit the full finishing chute yet and still had a hill to run down to cross that finish line. My legs wobbled as I started back up – my mom’s boyfriend Mark caught my eye from the sidelines and said “Jess! Go!!” and between that and Scott shouting at me to keep going, and I crossed that finish line.

It was then that I finally allowed myself to stop. And I basically crumpled to the ground. NOT with it whatsoever. I was so dehydrated and so completely emotionally and physically spent, it was all I could do NOT to pass out. Scott fed me water and gatorade like it was going out of style – I just couldn’t get enough fluids fast enough. I was pouring that water over my legs, my body, to cool down. I tried to eat an apple. No dice. I tried to eat half a bagel. It was SO hard to swallow and it wasn’t until after when my sis mentioned to me that she gave up on the bagel because it was so hard to swallow, did I realize just how dehydrated I had become.

Honestly, I have never felt that spent, that out-of-control of my body, in my life. It was scary. It literally took me a good 45 minutes to even get my legs back under me. And a good few hours before I started to feel half normal again. Normal enough to celebrate at our Wicked Half party later that day (more on that tomorrow).

(notice my eyes in this shot and the one below – totally still out of it, it took all my remaining strength to stand up to take these pics! And note Scott in both pics, such a huge grin – he was so proud of himself, but more so of me, and I love him even more for that, he is amazing.)

But – none of that mattered. I did it. I ran the Wicked Half.

And, damn, it feels good.

(and I use “good” as a relative term, my ENTIRE body hurts today – every single muscle and tendon is aching. All worth it, without a shadow of a doubt.)

And also – if you could send good vibes, prayers, whatever, to my sis, I’d appreciate it. She’s back in the hospital with an infection from her c-section and I’m so worried for her. I know she’s in the best care possible but still, it’s my SISTER and my niece. I love them very much. I ran this race very much for them.