This is what 7 miles in the rain looks like (in case you were wondering): 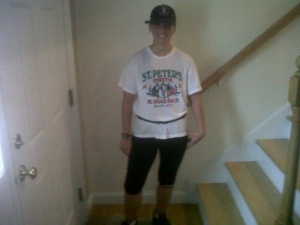 But that’s not the point of my post today.

My husband thinks I’m armed and ready for battle with all the gear I had on for today’s long run ala YuKanRun half marathon training.

Well, I *did*  have an awful lot of gear on today:
Hat – to keep the rain out of my eyes
Watch – to watch our pace
Not one, but two patella straps – gotta protect those knees
iFitness hydration belt – test-run baby!

He looked at me as I was gearing up and smirked — “What are you, going in for battle? Look at all that gear.”

At first I got all offended and annoyed that he clearly did NOT get why I needed all this stuff. But then, I had to giggle – he kept imitating me during the run, and as it started to go from a light sprinkle to outright downpour – he said, “don’t worry, you got this — you do have your survival pack on you, afterall.”

Such a jokester, he is.

But seriously, all that gear made a huge difference today. Especially the hat (hello, rain!) AND that iFitness hydration belt. Just like Naomi promised (thank you, dear!), it didn’t slip at ALL during our run. It stayed at my hips and I seriously didn’t even notice it was there – y’know until I needed a sip of water. And those tiny sips made such a difference – no dry mouth, no “OMG I’m dying of thirst” distracting thoughts.

Just me (and my gear) and Scott running along, conquering that 7-miler like a coupla running fiends!

So yeah – I guess Scott was right – I *was* geared up and ready for battle today. <—see babe? I admitted it, you were right. Happy now? 😉