Saturday (aka my 6-month barre n9ne-aversary) turned into a pretty fit-astic workout.

Let’s call it a run-barre-rundate, shall we?

I figured out that the barre n9ne studio is 2.7 miles (to be exact!) from my house and mentioned to my fit friend Steph that it would be fun to run to the studio, take class, and run back after. Getting a nice 5.4 miler in with a killer barre n9ne class to break up the miles? Genius, right?

So that’s what we did on Saturday. Steph met me at my house around 7:30 to head out for part one (of three) of our workout plan. It was pretty chilly out but I was surprised that with the sun shining, it wasn’t nearly as cold as I was bracing myself for. I also dressed just right for the occasion. Running capris, tank for class, Under Armor running top and (last minute decision) a puffy vest on top of that. I was leery of the vest at first – worried it would feel bulky or would be too warm after we got started. But with the wind, the puffy vest was the perfect way to stay warm. Genius (yet again)!

We chatted along the way, mostly talking about barre n9ne (since we’re totally obsessed…yes, I still feel like I’m a cult leader when I talk about barre n9ne!!) and the short trip to class was over before I knew it. Part one, done!

Part two…um, this one stung a little.  Saturday’s 8:30 class is the barre n9ne signature class – barre method, and it’s my favorite and one that always flies by. Saturday was no different – it flew by but not without lots of hard work along the way. Julianna has started adding a bunch of compound moves during the upper body work — like shoulder raises mixed with plie squats. Holy crap does that burn – especially on legs that just ran! But we got it done, with lots of shaking at the barre which I love!

Part three…the last 2.7 miles flew by even faster than the first 2.7. I joked to Steph that it was probably because I was starving and wanted to get home faster. 😉 Plus, my legs were screaming at me at this point after all that barre work and those compound moves. Man, I was never so happy to see the last lonnnng hill of our running route!

So this run-barre-rundate? I call it a total success. It was an awesome way to kick off the weekend (felt rather accomplished after all that!) and a great way to mix in running with barre, my favorite combo of all time. Plus, it was very fitting to head back to the studio where this amazing journey all began exactly six months ago to the day. And, I think we’ve started a tradition – Jo is going to come next time, and we’ve already picked a few other weekends to give this run-barre-rundate a run for its money.

(and in case you’re wondering, this is my fab friend Steph – taken at my sister‘s housewarming party last weekend. Yes, random photo op I know. Trying to get better at people pictures in my posts!) 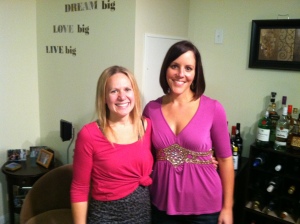